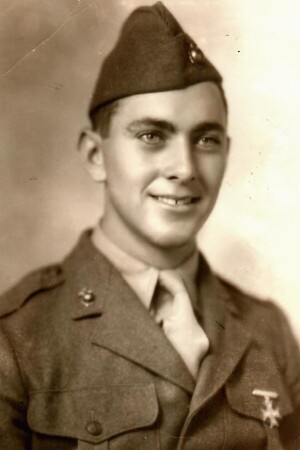 Mr. Bonetti was born April 4, 1926, in Torrington. CT, the son of the late Domenico and Teresa (Berti) Bonetti.  A graduate of Torrington High School, he enlisted with the US Marine Corps on June 29, 1944, during World War II.  He was severely wounded in action at Iwo Jima on the night of March 12, 1945, when a Japanese grenade hit his helmet as he took his turn to take watch for a possible sneak attack.  Gratefully, he recovered from his injuries, was awarded the Purple Heart June 8, 1945, and was honorably discharged on July 24, 1946.

Addo’s service to his community never ceased. He served as a State Representative for the 65th District, a City Clerk under two mayors in two separate decades for the City of Torrington, has long been active in volunteer efforts, including Little League, Fish Inc., the Warner Theatre and, also with the effort to renovate Fuessenich Park. He also has volunteered with the Salvation Army and The Civitan Club and has served on the board of governors of Charlotte Hungerford Hospital and was a Justice of the Peace.  The Little Leaguers coached by Bonetti benefitted from his two years in the minor leagues for the Brooklyn Dodgers and St. Louis Cardinals.  The Torrington Rotary Club honored him in 1999 with the Paul Harris Fellow for his decades of service within his community.

A mason by trade (specifically a brick layer), he enjoyed working around his yard, and doing odd jobs with his equipment after his retirement.   He was a lifelong communicant of St. Peter Church, and a member of the St. Peter Holy Name Society.

Addo’s family would like to thank all his doctors, the visiting nurses who cared for him, especially Laura Galvin, and the staff at Keystone who went above and beyond to help him through the past few difficult months.

Honoring his wishes, private funeral arrangements have been entrusted to Cook Funeral Home.

Condolences may be sent to the Bonetti family by visiting www.cookfuneralhomect.com