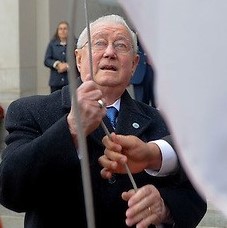 Peter A. Pino, 97, of Torrington, CT, peacefully passed away Saturday, May 18, 2019, at his home with his family by his side.  He was the beloved husband of Maria (Borghi) Pino for 47 years.

Mr. Pino was born in April 22, 1922, 1922 in Asti, Italy. He attended art school in northern Italy, and his artwork has been commissioned in Italy, France, Venezuela, Argentina and the United States.  In 1945, Mr. Pino applied for a visa to immigrate to the United States, where his family lived in New York City. It took nine long years for his application to be granted. He arrived in the United States on Oct. 12, 1954, and worked as a cover designer for a New York company "Divagando." In 1954, he moved to Torrington and worked for the Torin Manufacturing Company. In 1956, he left Torin and started his own business, Peter Pino Advertising and Art Service.

A well-known Litchfield County artist and sign painter, Mr. Pino has restored many religious statues throughout Connecticut. Through the years, his most challenging work has been the painting of murals in churches, halls, theaters and statuaries. Among the works that have given Mr. Pino international recognition is the trademark appearing on every bottle of Asti Spumante, the emblem representing Saint Secondo, the patron saint of Asti. Mr. Pino designed the logo for the coins and mugs for the 250th Anniversary of the City of Torrington. He also restored the murals on the inside walls of the Venetian Restaurant in Torrington, Along with designing the backdrops for the Miss Connecticut Pageant, he designed the scenery and the backdrops for the Torrington Civic Theater. In 1969 he continued his wonderful art work with a hand crafted Nativity that was displayed for all to see on Main Street in downtown Torrington. In 1977, Peter painted a 10-foot mural of Christ on the wall above the Altar of Saint Joseph Church in Winsted.

Peter was a member of UNICO National, the St. Peter Holy Name Society, and a communicant of St. Peter Church. In addition to his painting, he enjoyed woodcarving.  He was honored by the City of Torrington by being named the Italian “Mayor of the Day” on Columbus Day, 2012.

In addition to his wife Maria, he is survived by one son, Dr. Paolo A. Pino,  and his wife Cristina, of Fairfield, CT; and two grandsons, Lorenzo and Matteo Pino.

Memorial contributions may be made to V.N.S., 65 Commercial Blvd., Torrington, CT 06790.   Condolences may be sent to the Pino family by visiting www.cookfuneralhomect.com

To send flowers to the family or plant a tree in memory of Peter A. Pino, please visit our floral store.